Experience cruising to Norway onboard Holland America’s newest ship, Rotterdam. Read on to explore the ship and must-see stops along the way.

Arriving in Amsterdam Before Cruising to Norway

Arriving at the port a day or more before a cruise always makes sense. With the current state of traveling by air, it’s even more important to allow extra time for snafus. I hadn’t been to Amsterdam for many years. However, I felt I was still familiar with the city and planned a somewhat flexible day.

With an early arrival, I knew it would be unlikely that my hotel room would be ready. I stored my luggage at my hotel and asked where to find Dutch waffles. Fortunately, a popular place sat right across the street from my hotel, so it was easy to walk there and enjoy this Dutch favorite. As a non-breakfast eater, this was simply for research. It also meant that I could skip lunch.

Walking along a canal in Amsterdam. Photo by Theresa Russell

As is common in the travel industry, Wander With Wonder sometimes receives complimentary products and services. However, you can always count on Wander With Wonder to report with honesty and integrity on those places we believe offer wonderful opportunities for our readers. Wander earns income from ads and affiliate links on our site. Some of those links are for Amazon. As an Amazon Associate, Wander earns from qualifying purchases. None of these practices influence our reporting, but we believe in full disclosure. For further information please visit our legal page.

One of my favorite things to do in a town is touring on foot. There are free walking tours throughout the world. Of course, they aren’t totally free because tips pay for the guide’s expertise. On this day, I met my guide in a distant neighborhood near a familiar landmark and spent a few hours exploring Amsterdam.

Boarding and Exploring the Ship

Rotterdam is a member of the Pinnacle Class of ships, which gave me a head start on exploring the ship because I was familiar with the layout of other HAL ships in the same class. My balcony stateroom on Mozart Deck made me think of past piano lessons and took me down memory lane. Could I still play a Mozart Sonata? When I saw the decks with the names of other composers, I thought about which of their musical pieces I was familiar with.

Throughout Rotterdam, I passed multiple music venues and made a mental note to look at my daily newsletter to see where I might enjoy a musical evening. Rotterdam is an ideal ship for people like me who have eclectic tastes in music. Music options include blues, classical, popular, and even a piano act. I would find everything at the venues that make up an area known as the Music Walk.

Good food is just as integral to the Holland America cruise experience as the music. With a Culinary Council to guide the menus in the different dining venues, Rotterdam satisfies the taste buds with its eclectic menu choices. One of the most exciting choices was served at Pinnacle Grill. Have you ever seen bacon hanging from a miniature clothesline? Well, that’s precisely how my bacon arrived. Like the filet mignon and dessert I sampled, the presentation induced a Pavlovian response.

Whimsical presentations of food add to the dining experience at Pinnacle Grill. Photo by Theresa Russell

Rudi Sodamin, the head of the Culinary Council and the creative force behind his restaurant Sel de Mer, takes food to another level. Although concentrating on seafood, this restaurant also does things right with meat. And not to be outdone with that hanging bacon presentation, some of the dishes here compete with that. One seafood dish came with lobster hanging from a line. Chef Rudi Sodamin is known for playing with food, as evidenced in his food-centric books.

I frequented the Lido Buffet, usually just for a morning cup of tea, but I felt confident in the health standards when I noticed that the crew served the food. Speaking of tea, Rotterdam also serves afternoon tea.

Afternoon tea is a daily affair on the Rotterdam. Photo by Theresa Russell

Casual restaurants like DiveIn have hotdogs and burgers, while the New York deli offers a variety of sandwiches. Other specialty restaurants include Tamarind for Pan Asian and Canaletto for Italian. The multi-level main dining room offers an extensive menu with either fixed or flexible dining times.

My stateroom offered everything that I could need for a weeklong cruise. A small desk with plenty of USB ports and outlets made connecting electronics simple. It was so convenient not to switch out cables or cords just to get power or WiFi.

The soothing neutral colors in the room and the elegant tiles in the bathroom gave the impression that I was in a higher category stateroom than a balcony.

Sailing Away on Holland America Rotterdam to Rotterdam

Having never sailed from Amsterdam in the past, I was excited about a new adventure. We departed from Amsterdam without incident and sailed to Rotterdam, where the ship was christened. I again booked a walking tour to see the ship’s namesake city. I had expected the city to be a gritty industrial town but was quite surprised by what I saw.

The architecture throughout Rotterdam suggested that this city didn’t simply rebuild after the WWII bombings without thought but decided on an innovative rebirth. My guide took me to several quite interesting buildings. Within a very short time, I felt satisfied with my introduction to Rotterdam. I highly recommend a walking tour.

With a reasonable amount of time scheduled in port, I opted to take a shore excursion that visited a historic village and the countryside. Posebyen reminded me of Upper Canada Village, which had buildings from different areas moved into one compact area. My favorite part of the guided tour was seeing a knitted woman’s stocking with a massive calf protrusion. Allegedly a woman with large calves was a prized, hard-working wife.

The day of excursions culminated back at the pier with a few minutes to spend in the port, which had a fish market, ice cream spot, and a pleasant public area.

A Visit to Stavanger While Cruising Through Norway

I got on a bus early to explore the surrounding areas of Stavanger. After returning from this extended excursion, I planned to explore the town area near the port. As the rain dripped down the bus windows, our guide informed us that it was good to have rain this day lest we think it doesn’t rain very much in Norway. She wanted us to experience the typical weather.

After visiting a few spots, some too touristy for my taste, we reached the large boulders at Gloppedalsuren. What a perfect setting for mountain trolls!

Finally, Rotterdam reached a port that, unlike the others, had few residents and lacked any actual commercial area. For me, this was quintessential Norway. Small buildings nestled together with the mountains serve as a backdrop.

On this day, my adventure involved cruising into the 10-mile Nærøyfjord through spectacular scenery.

The hybrid boat offered plenty of deck space for capturing the mountainous backdrop and breathing the fresh air. When we finally reached the end of the fjord, we boarded a bus to a hotel with an excellent view of the valley below before we returned to Rotterdam by road, which included traveling through a 6-mile long tunnel.

I had already spotted a brewery when I first left the ship. Trying new local beer gives a taste of the place. This particular brew house resembled a stave church. That certainly added to the sampling experience.

Articles Related to Cruising to Norway on Holland America Rotterdam 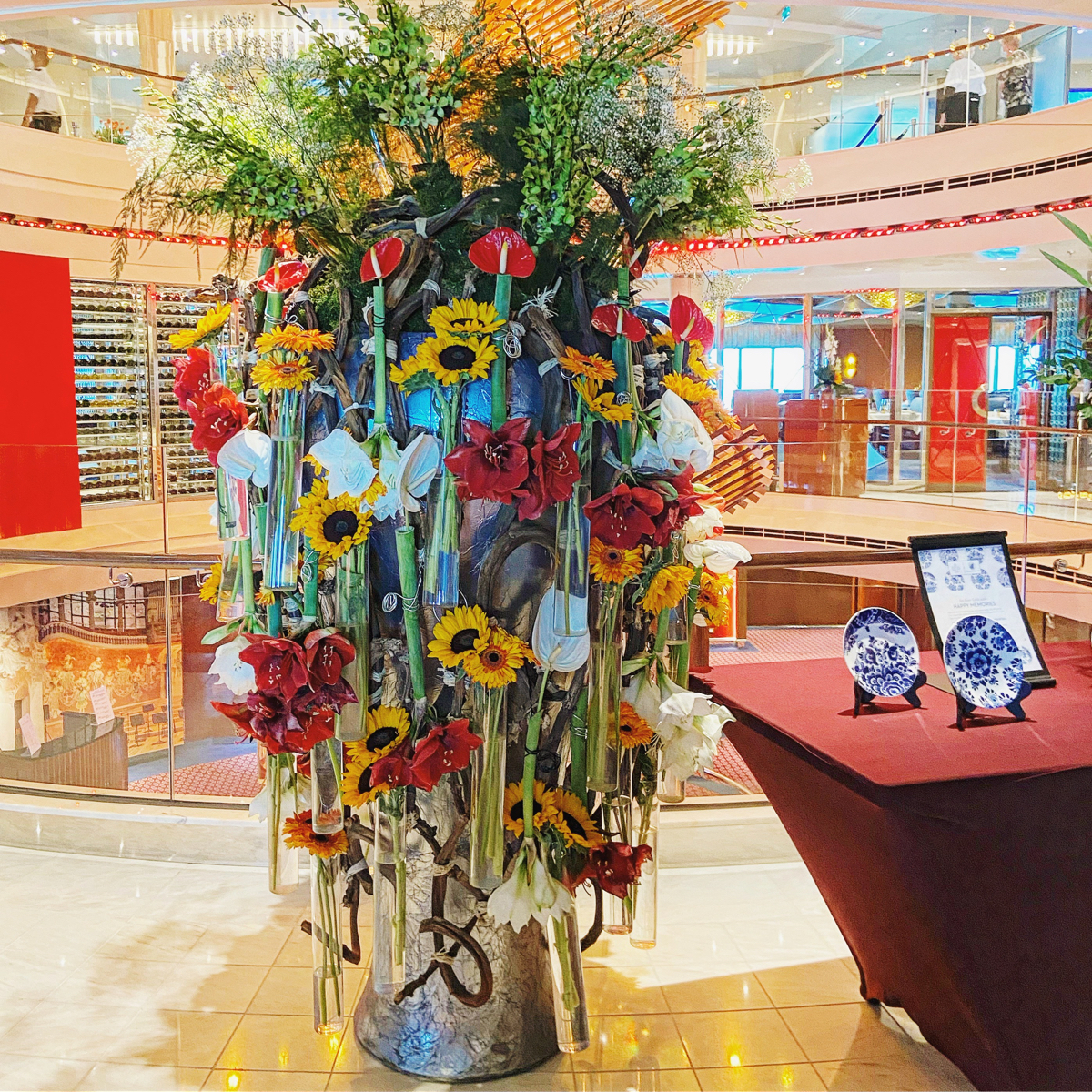 Floral arrangements are found everywhere on the ship. Photo by Theresa Russell

Final Thoughts About Cruising to Norway

Cruising on Rotterdam to Norway sent me down memory lane. There’s something special about returning to cruise with Holland America, which I had sailed more frequently in the past. Book a cruise on Holland America’s Rotterdam if you enjoy various music, good food, excellent service, and special touches, like the fresh flowers throughout the ship. When planning your next cruise to Norway, the Caribbean, or maybe Alaska, let Wander with Wonder be your guide.