Prices: Bitcoin was higher for a third straight day, changing hands around $41,500. But the headiest (and most ridiculous) crypto-markets action was in ApeCoin.

Insights: Bitcoin “minnows” might be small, but don’t doubt their resolve.

Technician’s take: There has been a loss of downside momentum on bitcoin’s daily chart, which could keep short-term buyers active.

Catch the latest episodes of CoinDesk TV for insightful interviews with crypto industry leaders and analysis. And sign up for First Mover, our daily newsletter putting the latest moves in crypto markets in context.

Indecisiveness ruled markets Wednesday as bitcoin flipped between gains and losses on the day and U.S. stocks ended the session mixed.

One thing that was clear was that ApeCoin (APE) was pumping, though even that move was panned as ridiculous, entirely speculative and based on unconfirmed tweets.

Bitcoin was holding near the $41,500 price level after a three-day price increase of nearly $3,000. Analysts said that the largest cryptocurrency was benefiting from optimism that a spot bitcoin exchange-traded fund might win approval from the U.S. Securities and Exchange Commission.

In other crypto news, the giant crypto exchange Binance unveiled its new Twitter emoji Wednesday, and soon took it down after users pointed out its resemblance to a swastika.

After January’s price correction, which seemed dramatic by many standards but par for the course for crypto traders, bitcoin “minnows” (which we are calling those that hold 0.1-10 BTC) began accumulating crypto at record speed. 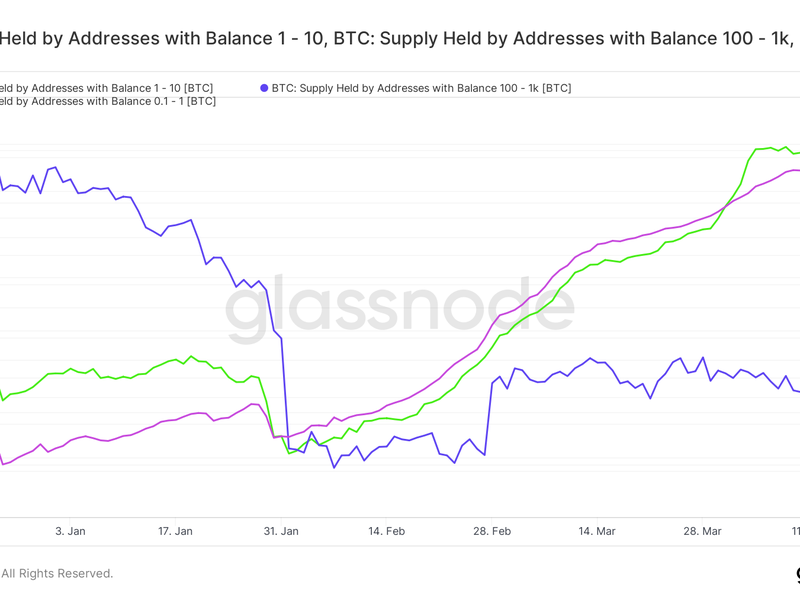 All the while, the number of wallets with a bitcoin balance of 100-1,000 declined, suggesting a selloff by larger holders.

According to a new report from Glassnode, these “minnows” also have a fierce appetite for pain and are hodling their crypto through some intense volatility and price compression even though their coins have yet to experience a breakout.

For its part, Glassnode is defining long-term holders as those who bought before bitcoin’s all-time high In October 2021, while anyone who bought after that date is considered a short-term holder.

Those who bought after the all-time high — regardless of portfolio size — didn’t like the ride.

Glassnode points to a massive selloff by those who bought at the top (short-term holders) at around $50K-$60K.

“What we can see is that the recent correction pushed a historically significant volume of LTH coins into an unrealised loss. This means that the amount of buying between August and November, which has now become underwater HODLing, is some of the most significant of all time,” Glassnode wrote.

Glassnode notes that investors that bought the top, those active between August 2021 and January 2022, have seen prices plunge beneath their cost basis and have dumped bitcoin causing a “large scale redistribution of the bitcoin supply to new hands.”

At the same time, Glassnode observes that those that purchased bitcoin in the last week of January — the minnows — are still hodling.

“Much of the volume profile from 22-Jan remains intact. Despite an additional 2.5 months of sideways consolidation, a large proportion of the market appears unwilling to spend and sell their coins, even if their coins are held at a loss,” Glassnode wrote. 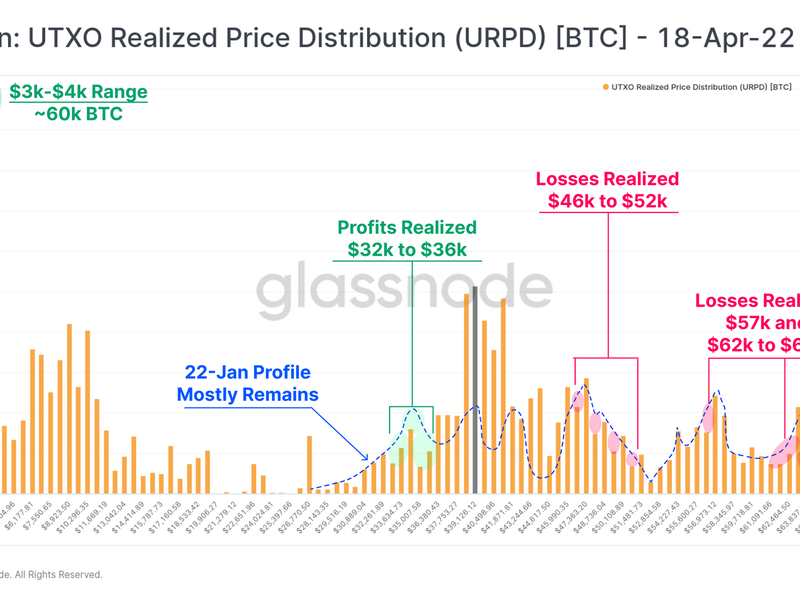 A big part of the bitcoin ethos is testing your faith, or conviction, in the asset class. Crypto has sustained immense periods of volatility, bear markets, and bull as well, yet there still are investors willing to dive in.

“This correction has been historically significant, suggesting the confidence and conviction of Bitcoin investors has been thoroughly tested,” Glassnode wrote. “What we have seen over the last 5-months is a 50%+ correction that appears to have significantly reshuffled the ownership structure of BTC. A great many Long-Term Holders with coins above $50k appear completely unfazed, whilst others have been totally shaken-out, at a historically significant rate.”

Some whales got shaken out but the minnows keep on swimming. 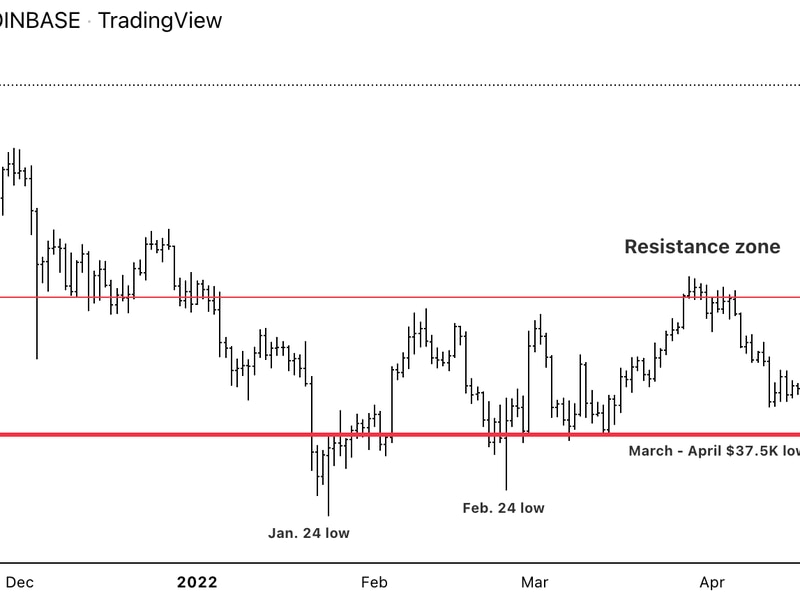 Bitcoin (BTC) has maintained support above $37,500 over the past month, indicating a loss of downside momentum.

On intraday charts, however, BTC appears to be overbought, which could briefly stall the current upswing in price.

A series of higher price lows since Jan. 24 suggests continued buying interest around the $32,000-$37,500 support zone, which is the bottom of a year-long price range.

The next major resistance level is seen at $46,700, which has capped price rallies over the past few months. Typically, price rises begin to stall after retracing roughly 38% to 50% of the prevailing downtrend, similar to what occurred in September of last year.

Still, the significant slowdown in BTC’s long-term uptrend suggests upside could be limited over the next few months.

In case you missed it, here is the most recent episode of “First Mover” on CoinDesk TV:

It’s Bananas, but Unconfirmed Metaverse Rumors Are Pumping ApeCoin: The latest price pump in almost-anything-goes crypto markets shows just how quick and easy it can be to touch off a fresh flurry of speculation.

US Sanctions Russian Crypto Mining Host Bitriver: Bitriver and 10 subsidiaries were added to the OFAC list Wednesday in connection with their ties to the Russian economy.

Elon Musk Shouldn’t Lead Twitter: Crypto, the source of so many of Twitter’s problems, also provides a blueprint in advocating for permissionless protocols.

Today’s crypto explainer: How Can Satoshi Nakamoto Have a Birthday? The Significance of April 5

Other voices: What is ‘Web3’? Here’s the vision for the future of the internet from the man who coined the phrase (CNBC)

This story originally appeared on Coindesk