A “quirky, one-off” retro clothes store has launched in Hull city centre in what the owner says is a first for the town.

Dave Mentesano, 52, is selling his collection of high-end wear that has taken him more than 10 years to put together.

Rare Adidas tracksuit tops, that have become hugely popular in recent years, are among the items on sale in New Amsterdam 1933, as well as brands including Nike, Lacoste, North Face and Burberry.

Many of the products are “dead stock” meaning the manufacturer has discontinued the line.

Mr Mentesano, who was a roofer for 16 years, has always held a passion for rare items of clothing having traded on stalls in the past.

However, his leap into the Prospect Centre to launch his first shop couldn’t have come “at a worse time” given the backdrop of the coronavirus pandemic.

“I was down to sign the lease before they shut everything down in March. I managed to delay signing it with the Prospect Centre,” he said.

“I’ve been a roofer for 16 years but I always wanted to do this. I couldn’t have opened at a worse time. I’m under no illusions but I just wanted to get it going. It’s still a working progress.

“There’s nothing like that in town. It is a bit of a one-off. It’s quirky one-off stuff. It is a bit different.”

New Amsterdam 1933 opened next door to Tiger Leisure in September. The unit was previously taken up by Cherry Bomb.

Dave’s collection has been his pride and joy but says now is the right time to open his business, despite the obvious pitfalls of trading during a pandemic.

In order to keep his stock levels replenished, he is also encouraging the public to bring in their own high quality clothing that may have been hiding in a wardrobe for him to buy.

“The collection in there has taken me 10 years to collect. I’ve been buying it in advance for that long,” the owner said.

“The clothing is absolutely mint. It’s all steam cleaned.

“I’ve got enough stock to last a few months then I need to get some more stuff in.

“I’ve never bought and sold before. I’ve took a gamble that it would work.

“I won’t buy anything unless it is nine out of 10. I won’t have them if there’s marks, pulls or stains in it.”

Dave admits trading in the city centre has been quiet so far but says he has still managed to sell 160 items in his first month buying and selling close to the Brook Street entrance of the shopping centre.

In a bid to encourage customers to engage with his brand online, he has launched a competition to give away £500.

He said: “The town is really quiet at the moment so I’ve put on a £500 competition. It is just to get myself out there.

Asset Class of Vintage Cars During the Pandemic: Sales at High End on Ice, After Steep Price Drops Earlier in the Year

Mon Oct 12 , 2020
Affordable Classics rise the most, American Muscle Cars fall the most. Ferraris flat, after big drops earlier. Beautiful machines all of them. By Wolf Richter for WOLF STREET. Selling these beautiful machines, from American muscle cars to rare Ferraris, got a lot tougher during the Pandemic, after it had already gotten tough before […] 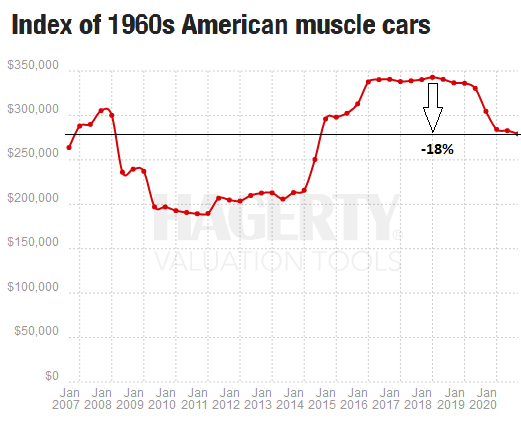